OSC’s She was a good good girl

Zen scribbles is a writer and self proclaimed feminist who I wrote to in early 2017 about their faith (Islam). They’re a good good girl, jet setting around the world, being an Arabic translator and even replying to her fan base online. They’re a feminist AND a Muslim, they’re an Islamist! Can she do anything wrong? Answer no! So when they wrote about “Muslim woman’s day” I felt an irresistible urge to exchange messages with her.

She shared with her readers. . .

“It’s also worth pointing out that this treatment of women is not based in Islam (which actually places women on a pedestal), but in the culture, just as many non-Muslim cultures also mistreat women. People just conveniently decide to forget that.”

Beautiful. It’s the other people that need to learn!

“At the same time, I have attended school, graduated from university and have been enjoying a growing career since I was 21. Currently, I work in an environment where the male to female ratio is horribly skewed, but yet enjoy a perfectly normal relationship with most of them.

Reading back to myself I’m so satisfied with Zen’s replies. I mean she’s taking time out of her day to share the beauty of Islamism with everybody. She’s making Islam an attractive prospect for young girls. She was a good good girl.

No! No, that’s not true. She isn’t hooking, she’s a wealthy translator. Still, thinking on it, Zen’s answer was a bit like an argument from authority (as are many translation answers). “Oh, that word doesn’t really mean what it says, I know.” That’s a difficult thing for people to come to grips with in everyday conversation.

The witnesses often use arguments from the original Greek language, drawing from the Watchtower (who have no Greek scholars). Similarly Muslims use classical Arabic as a buffer to protect their faith from being honestly interacted with.

So how do we respectfully interact with these people without becoming experts in every language they want to throw at us?

I think the answer is to learn language principles, draw on multiple sources and ask sincere questions (“do you really know what that text says in Arabic?”)

“I know another language and that text is how I say it is” is a daunting challenge and can silence many of us, still when we know a little background knowledge it doesn’t have to. 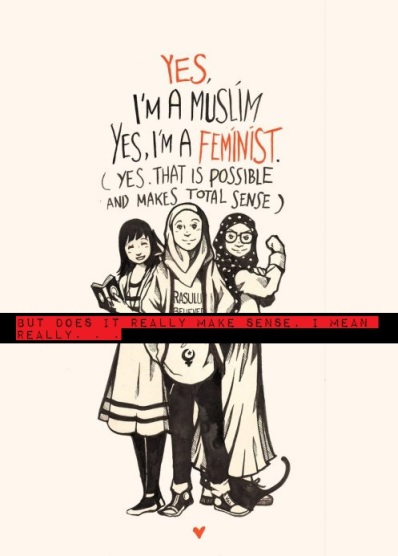 Islam isn’t feminism ladies, the Qur’an says you’re a field and a man can enter his field in any way he wants, it says your testimony is worth less than a man’s, while the traditions say you make up the bulk of hell and make prayer meaningless by walking by (an honour you supposedly share with dogs and other animals). The faith puts women in body bags and expects them to walk around like second class things.

That’s not me meaning to be inflammatory, just repeating what’s already on record with a mind to correct an untruth, Zen’s untruth. In fact, Zen’s speech about not being pushed around or anyone making her do anything reminds me of the third chapter of a book called “Killing Christians”, a book on Christian persecution, I’d recommend it if you’re after something in terms of human stories of hardship.

“The mother raised her index fingers to her forehead, smoothed the eyebrows, and studied her makeup to be sure it was just right, as she did every night before Rafiq arrived home. . .She stared at her reflection for several seconds more, then sighed. Her eyes drooped to the cell phone resting on the counter by her left hand. Rafiq had promised to be home at six o’ clock sharp. And he meant his own sharp time, not standard “Arabic time.”

The Damascus power couple kept close tabs on each other as the now four-year-long Syrian war grew more dangerous each day.

A viable defense against peacetime thieves, their gated community offered little more than a distraction to militant Sunnis in their quest to eradicate Alawite government officials and anyone who appeared friendly towards them. Yet the Hadad home—large enough to house twenty average Syrian families—provided one helpful distraction to the terrorists, one that Dori hoped was in her husband’s favour again tonight. It advertised the family’s considerable wealth, and so far, Rafiq’s pursuers had been satisfied with his offers to buy weapons for their cause and had not insisted on his bodily participation in the fighting. Over the last several years, Rafiq had purchased hundreds of weapons and countless rounds of ammunition for the Free Syrian Army.”

You can just imagine a disinterested Muslim woman saying “Islam’s wonderful, nobody stops me from wearing makeup, living in luxury, having nice things. I don’t go off to war and nobody could make me.” But how is any of that Islam? If anything, she’s only got those things because she’s keeping Islam at arm’s length (or in the case of Dori her husband’s money was). Thank God many western “Muslim” girls had nominal hypocrite parents who sent their daughters to school and didn’t marry them off at 6 years old.

The problem comes into our non-Islamic cultures when those nominal girls send sex slaves and human bombs to the fanatics in the form of internet propaganda. Great job ladies, you had it nice while hundreds of million of women are being savaged by the ugly face of the religion you falsely claim to represent.

Some girls get to parachute jump here in the west, people in the middle east get to fly from buildings, hitting the floor below. Some girls go to school, some girls are kidnapped from school and gang raped in the jungle, then sold into slavery for Allah’s glory.

Some of us tell the truth about Islam, fake Muslims don’t.

God bless everyone, keep the faith, our cross has the final word. And if Muslims want Him, they can meet the real Jesus today.